Games with DLSS 3 will run on the old GeForce RTX in DLSS 2.0 mode

One of the announcements made in the framework of the GeForce beyond presentation was the NVIDIA DLSS 3, a further evolution of super-sampling technology based on deep learning, which first appeared in 2018.

The new version of DLSS takes advantage of the Optical Flow Accelerator hardware function, which transfers pixel motion data from subsequent frames to the Optical Multi Frame Generation neural network, generating new frames through post-processing on the GPU and even providing increased performance in game scenarios with a focus on CPU power.

Although the Optical Flow Accelerator was originally introduced in the Turing architecture, NVIDIA's Vice President of Applied Deep Learning Research, Brian Catanzaro, stated that it had received significant improvements in the Ada Lovelace on which the GeForce RTX 40 Series graphics card line is built.

"OFA has existed in graphics accelerators [NVIDIA] since Turing. However, in Ada it is much faster and higher quality, and we rely on it in DLSS 3".

Therefore, DLSS 3 will not be available on previous GeForce RTX 20XX and 30XX graphics cards.

This news sparked a wide debate among NVIDIA users, who began to doubt whether the claimed 35 DLSS 3-enabled games would be compatible with DLSS 2.

0 or super-sampling on old graphics cards in them will be excluded?

Fortunately, this will not happen, as confirmed by the representative of NVIDIA under the nickname AndyBNV in a message on the ResetEra forum.

According to him, the owners of GeForce RTX 20 series and 30 series will be able to include in the new projects DLSS 2. 0.

"When the game with [support for] DLSS 3 is released and you have a GeForce RTX 20/30 Series graphics card or laptop [based on it], you will also be able to participate in this DLSS 2 project. 0" 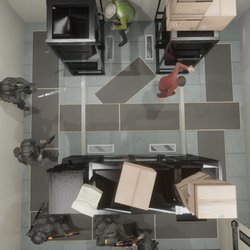